“Next year, I hope we launch 24 Starlinks,” Shotwell said. 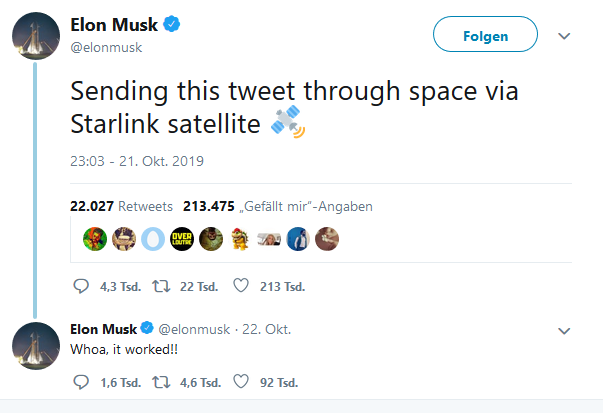 In fewer words, Musk thus implied that each Starlink satellite likely already costs significantly less than $500,000 even before SpaceX has begun to reap the full benefits of economies of scale. In fact, based on official 2016 figures that estimated the cost of each BFR booster/ship at less than $4M and Musk’s estimate that Starship could cut Starlink launch costs by a factor of 5, the cost of Starlink v0.9 production could have actually been as low as ~$350,000 apiece, with launch costs on the order of ~$20M.

SpaceX is confident it can start offering broadband service in the United States via its Starlink constellation in mid-2020, the company’s president and chief operating officer Gwynne Shotwell said Oct. 22. Getting there will require the company to launch six to eight batches of satellites
We need 24 launches to get global coverage. We’re hoping for 24 launches by the end of next year., jedoch Every country has its own process. In many countries the company will be required to partner with local telecom firms to offer the service.

where the terminals should be placed in someone’s home are still issues to be ironed out.
Solar Roof bzw Panels bieten sich als zusätzlicher Vertriebsweg/Installationsbereich der sich bereits „inhouse“ befindet an

By increasing the number of orbital rings where these first Starlink satellites would operate, SpaceX said they could achieve enough internet coverage to provide service by next years hurricane season in southern United States. Internet from satellites does come in handy for emergency services during natural disasters when communication systems’ cables and towers get damaged.

The FCC approved their request this month allowing SpaceX to deploy and operate satellites in more orbital rings around Earth. On December 19 they stated:

When (comes Starlink to) germany?