This is a story with many twists and turns, but the bottom line is that we seem to have discovered the world’s fastest first generation Tesla Roadster with an experimental, mutant drive motor, never intended for release, accidentally sold to an unsuspecting customer.

It all began innocently in August of 2019, when a Tesla Roadster owner called us, trying to sell his bricked (dead battery) car to us. In 2019, these were the dark Roadster days, just after Tesla had stopped 3.0 replacement battery production due to engineering problems.

With no drive battery replacement solution on the horizon, many owners were dumping their dead Tesla Roadsters, fearing they would no longer be able to drive their cars once the batteries reached end of life.

We bought Tesla Roadster VIN 581 as a parts car from this owner. It sat for two years waiting to be resurrected, and as we brought it back to life, an intriguing tale emerged, which catapults this early Tesla to celebrity status, cementing its place permanently in Tesla history. 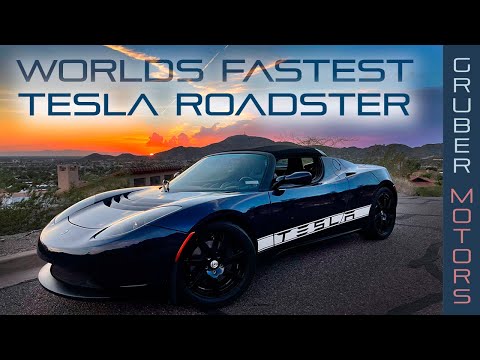 So I just watched the video and I can’t help but notice your story doesn’t really add up. The only source you quote is a facebook post, which your employee admitted faking in order to get into a facebook group. So how would your employee now about the whole 0-60 in 3.0 seconds thing, the blown away service technician and Teslas attempt in getting back the motor? Especially as you mentioned the original owner passed away? Wasn’t all of that part of his made up story to get into the group? Maybe you just forgot to include an important source in your video?
But then you go on a rant for a good portion of the video about your competitor declaring „war“ over a facebook page??? Doesn’t really help your credibility if I’m beeing honest.
Maybe the car has a prototype motor, hand-build and what not, like the previous owner mentioned when selling the car. But 0-60 in 3.0 seconds just casually in front of the service center?
You mentioned a part two of the video, would be great to get some more actual background story, possibly a video from back in the day, some letter from Tesla regarding getting back the motor or just anything proving your story. At last, surely you’re going to test the car on a drag strip before taking the motor apart?

If this all ends up to be true, it is definitely a story to remember, you could even call it „incredible“. Which as of now, is literally what it is.

Our employees girlfriend, who posed as the owner of VIN 581, did not create the FB post listed in our video. The new admin of the site, who began deleting membership for anyone associated with our company, is the source of the backstory on this Roadster that we described and posted in our video.

Once I exposed who really owns this car, to set the record straight, on another FB site, our competitors post was quickly deleted by him.

We are now receiving more details on this special Roadster, and will have a follow-up video, with time trials, to either refute this story, or corroborate it.

That makes much more sense now, thanks for clarifying.
Looking forward to seeing the follow up video!